Fleet Cooper SR and his song Rev. Fleet Cooper, Jr.
Both he and his father owned large acreages and resided about one mile south of Concord School on the Clinton-Roseboro highway, and there they are both buried. Both of the graves have practically been forgotten, for they are now being plowed over


Taken from the Religious Herald, February 22, 1828, pg 27: "Died, in Sampson county, NC, after a few days' illness, the Rev. Fleet Cooper, in the seventy-ninth year of his age. The deceased had been an advocate for the doctrines of the cross in the Baptist church for fifty years, left behind him an unblemished reputation, and died in the full assurance of a glorious immortality. 'Blessed are the dead that die in the Lord, from henceforth; yea, saith the Spirit, for the rest from their labors and their works do follow them.'"

In the name of God Amen

I Fleet Cooper of the County of Sampson and state of North Carolina being weak in body tho sound in mind do herby make and ordain this my last will and testament as follows. First I give and bequeath unto my son John Cooper a negro man named Cupit to him and his heirs. Secondly to my son Daniel Cooper the land and plantation where I now live beginning on or near the river run thence west with Coor Coopers line including the Juniper Branch thence across the said branch near Lockamay thence to Daniel Coopers corner in mocoson above the mouth of the Hogpen Branch thence with the same including the mill and two acres on the other side thence mocoson to the back line in Cohary Swamp joining Elizabeth Cooper line thence to the beginning containing six hundred acres more or less to him and his heirs to take possession there of so as to sell or other ways to dispose of after the death of my wife Sarah Cooper. Further it is my will that my wife Sarah Cooper have the use of the plantation and tools and stock of all kinds and housel goods. It is further my will that after my wife dies that my daughter Elizabeth Pope, Jacob Cooper, John Cooper, if living at the time, Wilson Cooper, Mary Butler, Sarah Porter, Daniel Cooper, Nancy Cooper, Penolope Cooper, Dise Cooper, Roda Cooper shall make a division of the fore mentioned property, stocks of all kinds and plantation, tools and housel goods together with the following negroes. A negro girl named Susy together with her increase to who so ever they fall to. Another negro girl named Rose together with her increase to who so ever she may fall to. A negro boy named Dick and another negro boy named Cuff. All comes into the former division and if neither to be sold and make a division.

It is further my will that all those things mentioned belong to the legates to them and their heirs with the following provision. Elizabeth Pope being considered to have received fifty dollars formally. Mary Butler having received two cows and a calf and a feather bed formerly. Sarah Porter having received two cows and calves and feather bed formerly. Nancy Cooper, Penolope Cooper, Dise Cooper, Roda Cooper have not received cows, calves and beds as the others.

And I hereby acknowledge this and no other to be my last will and testament and I leave Jacob Cooper and Daniel Cooper executors to the same with this provision that the said Jacob Cooper and Daniel Cooper with the consent of my wife Sarah shall if they judge it necessary hire out the said Cupit which money may be applied to pay debts if any or applied to the use of the family for two years if required.

And further that said Jacob and Daniel Cooper with the consent of my wife Sarah if the cattle increases sufficient may go to the girls which have not received and take receipts in order for settlement.

NB it is my desire that Jacob and Daniel Cooper shall have my blacksmith tools for their trouble.

NB that Daniel Cooper be not interrupted on the land where he now lives from clearing or any other use.

In witness where of I have his own testimony hand an seal this fifth day of February 1816.

This was the above will duly proven in open court and ordered to be recorded in the Clerk's office. 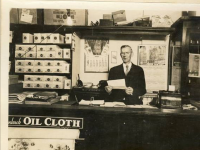